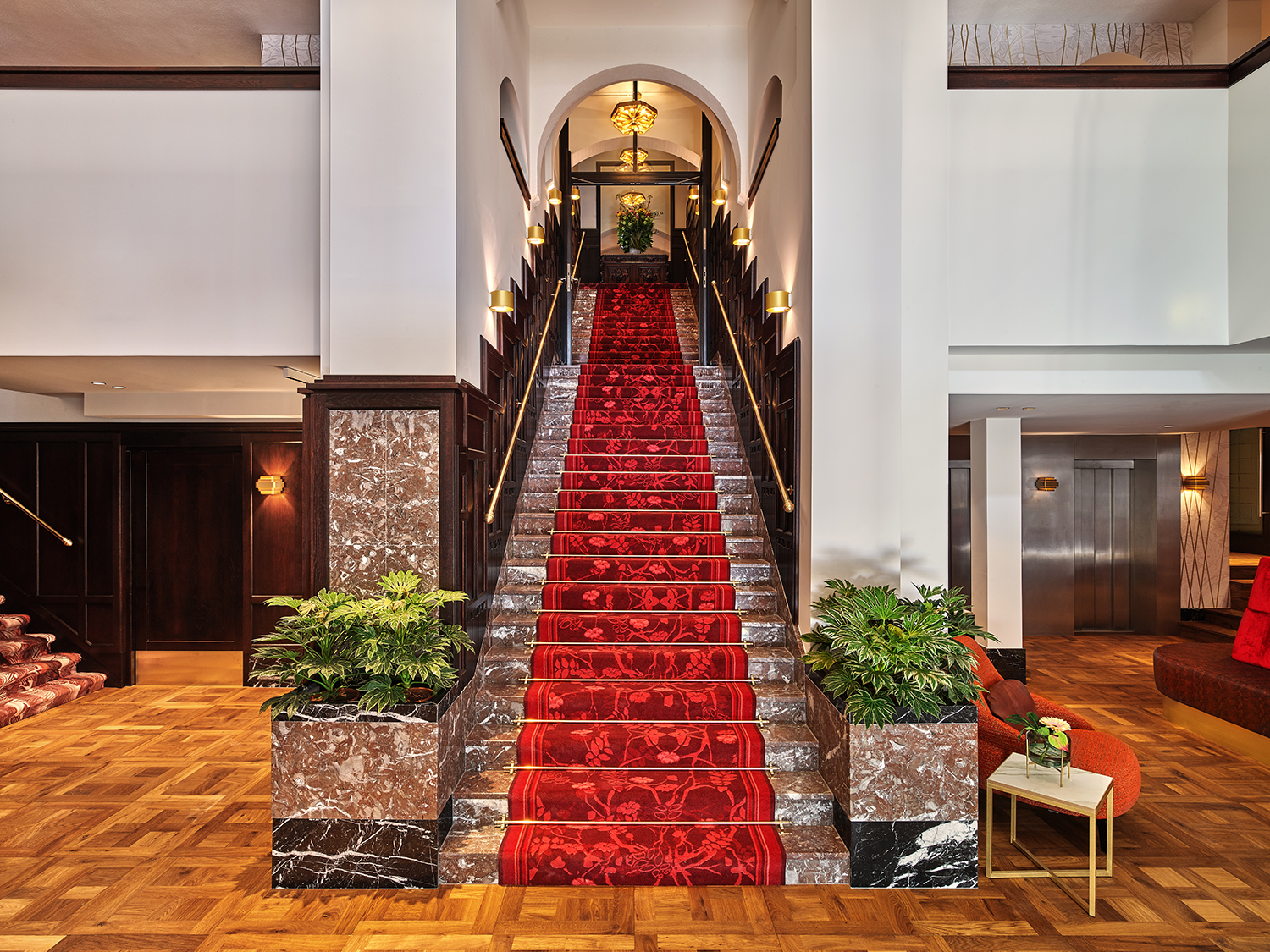 By Colin9 January 2023No Comments

Following major cities such as New York and London, Amsterdam is next to get its own Hard Rock Hotel. To realise this dream, the former American Hotel on Leidseplein underwent a major renovation.

Owner of the hotel, Eden Hotels, contracted Bulsink to take care of the complete conversion of the ground floor and basement. Using the formula of Hard Rock Hotels as the basis, original art nouveau details of the historic American were restored to their former glory. The result: Hard Rock Hotel Amsterdam American with an art nouveau twist.

The American Hotel has been renovated several times over the years. With the latest renovation, architect Ray Kentie opted to return to the hotel original style when it was first built around 1900, the era of art nouveau and Jugendstil.

Entrance and mezzanine: marble staircase to the first floor

One of the most striking elements upon entering the hotel is the monumental marble staircase with red carpeting. During an earlier renovation, this staircase was shortened halfway.

Bulsink brought the staircase back to its original state by re-polishing the existing marble and adding new marble slabs on a specially designed steel construction. The oak panelling with brass details was also restored to its former glory. 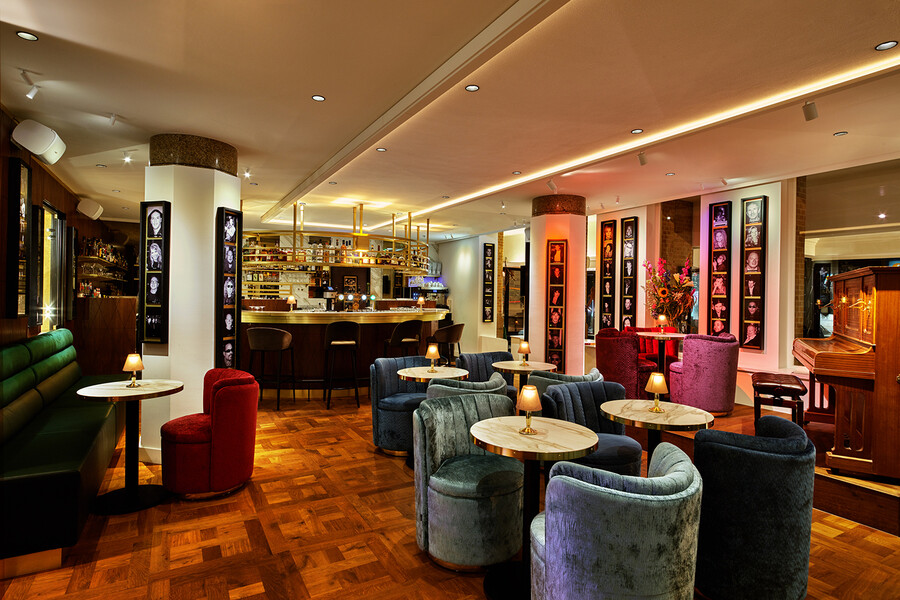 The entire ground floor was stripped down to the shell for the conversion. This included the lounge area and the bar. Raised square architecture adorned the original ceiling, which the architect wanted to revive in the new design. These have now been incorporated in the new acoustic ceiling. Not in plain view, but important nonetheless: Bulsink added fire-resistant cladding to the steel structure under the ceiling.

The bar received a complete makeover with LED lines, decorative strips and sunken spotlights. Recesses in the wall allow the beautiful display cabinets with the renowned Hard Rock memorabilia to be viewed without compromising on space. 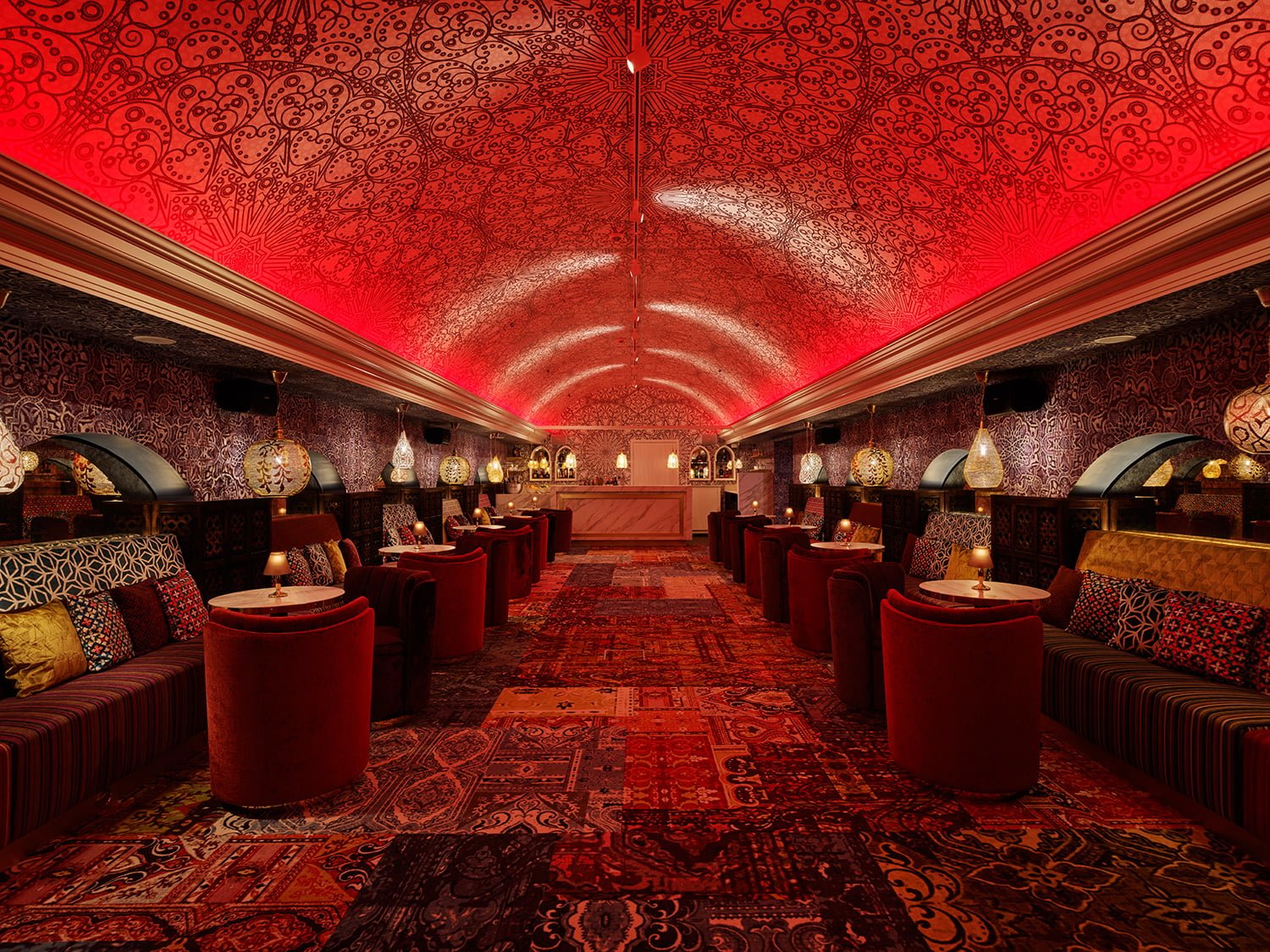 Mata Hideaway: wallpaper on the ceiling and prints on the carpet

There was a day when legendary dancer Mata Hari spent her wedding night at the American Hotel. Today, more than one hundred years on, guests can organise private and business events in the room named after her.

It is a unique venue with a vaulted ceiling that, like the walls, is completely covered with wallpaper. The floor is also special: a printed carpet that evokes a feeling of being in the Marrakesh Express.

The conversion of the basement called for creative solutions on all fronts. Particularly the limited interior height presented a huge challenge. Through careful and clever teamwork, the team managed to conceal all systems beautifully by installing the ventilation ducts in the width. This included the massive sound system you would expect in a ‘Body Rock’. In addition, Bulsink applied a moisture-proof barrier prior to the finishing work, and fitted the basement with a specially designed gym floor. 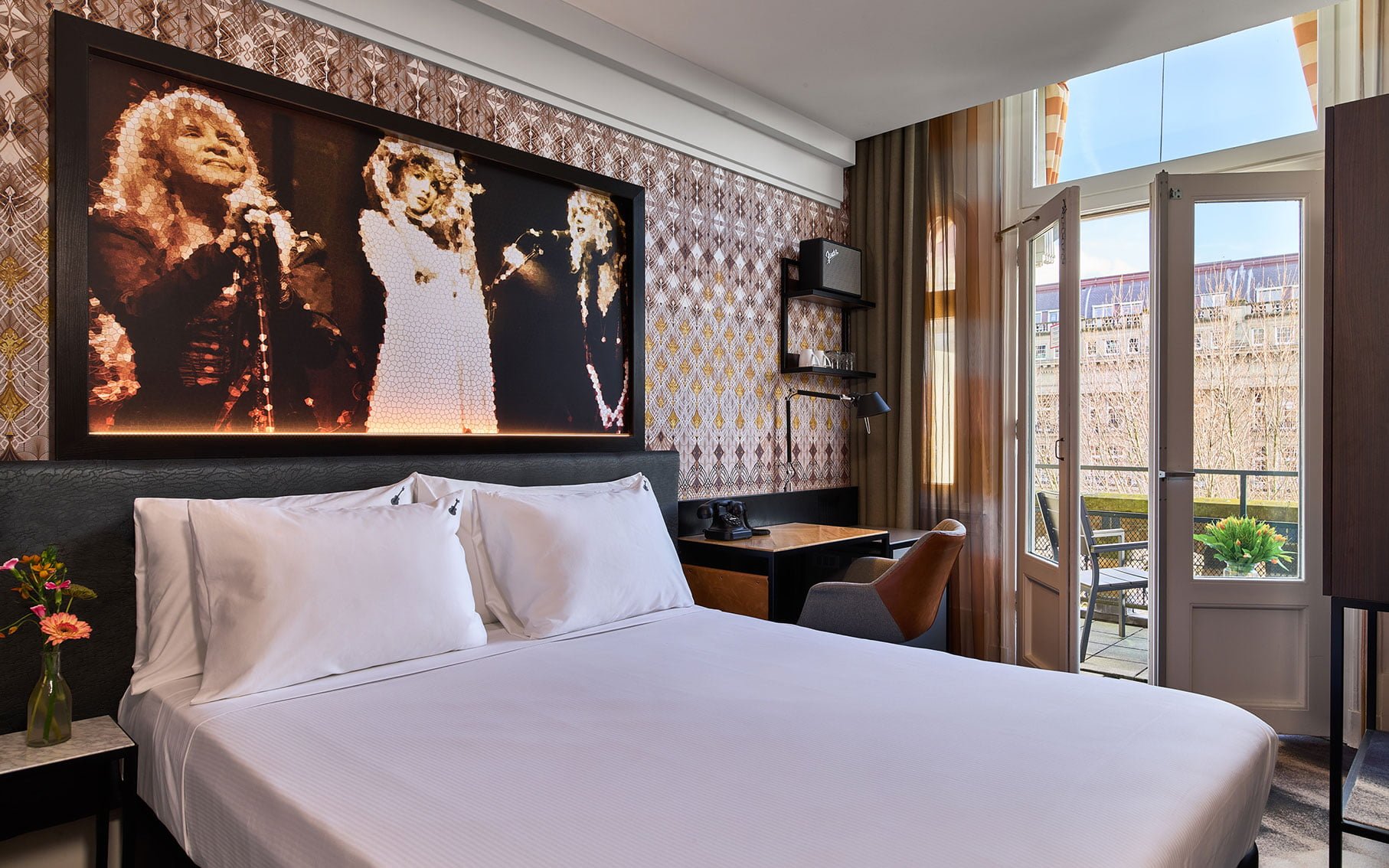 Eden Hotels has fourteen hotels and has put priority on renovating each property for some time. To achieve its ambitions, the chain works closely with Bulsink. One example is the refurbishment in 2018 of the Savoy Hotel Rotterdam, a four-star hotel with 95 rooms in the fashionable Hoogkwartier district.

This was followed by the ED Amsterdam (71 rooms) in 2019. In 2020, work started on the conversion of the American Hotel. And just this month, we completed a refurbishment project at the Jan Luyken Hotel Amsterdam, a boutique hotel comprising 61 rooms.

Technical Director Ger Klaver: “Bulsink has well-organised logistics and the managers are on top of the day-to-day execution, putting them head and shoulders above most other contractors.” Bulsink’s experience with strict brand formulas also came in handy during the conversion of the American Hotel: “They really understand how important concepts like this are. They know what it means to implement it, and that it comes down to the smallest details.”

Close Menu
Through our website a cookie is placed from the company Google, as part of the "Analytics" service. We use this service to get reports and to keep track of how visitors use the website. For more information see our privacy policy.
Accept
Manage consent

This website uses cookies to improve your experience while you navigate through the website. Out of these, the cookies that are categorized as necessary are stored on your browser as they are essential for the working of basic functionalities of the website. We also use third-party cookies that help us analyze and understand how you use this website. These cookies will be stored in your browser only with your consent. You also have the option to opt-out of these cookies. But opting out of some of these cookies may affect your browsing experience.
Necessary Always Enabled
Necessary cookies are absolutely essential for the website to function properly. These cookies ensure basic functionalities and security features of the website, anonymously.
Functional
Functional cookies help to perform certain functionalities like sharing the content of the website on social media platforms, collect feedbacks, and other third-party features.
Performance
Performance cookies are used to understand and analyze the key performance indexes of the website which helps in delivering a better user experience for the visitors.
Analytics
Analytical cookies are used to understand how visitors interact with the website. These cookies help provide information on metrics the number of visitors, bounce rate, traffic source, etc.
Advertisement
Advertisement cookies are used to provide visitors with relevant ads and marketing campaigns. These cookies track visitors across websites and collect information to provide customized ads.
Others
Other uncategorized cookies are those that are being analyzed and have not been classified into a category as yet.
SAVE & ACCEPT